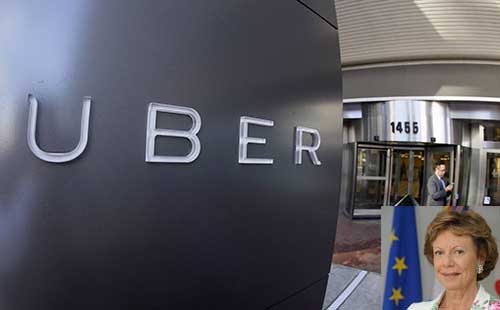 Did someone asked for the consumers interest?

Ms Kroes, a former competition and telecoms regulator, was a vocal proponent for Uber while in office and a well-known critic of efforts to ban the company in countries including Germany.

The board includes Ray LaHood, a former Republican lawmaker and President Barack Obama’s first Secretary of Transportation, and Melody Barnes, a former director of the Domestic Policy Council in the Obama White House. The other six members of the board reflect Uber’s international reach. They include Roberto Danino, the former prime minister of Peru, Princess Reema bint Bandar Al Saud, a Saudi Arabian princess and entrepreneur and Neelie Kroes, Netherlands special envoy for startups and a former European Commission vice president.

As Uber has expanded around the world, it has fought openly with local governments. In some cases, it has moved into cities by avoiding harsh taxi regulations. Now, the company is trying to take a more cooperative approach. It is positioning itself as a supplement to public transportation, and has said it hopes to take cars off the road by expanding its carpooling service.

“Smartphone apps like Uber can significantly improve transportation in cities at no extra cost to the taxpayer,” Uber’s Chief Advisor David Plouffe wrote in a statement.

The board will meet twice a year. Members are getting compensated with equity in the company, an Uber spokesman said, declining to specify the amount or value of the shares they’re receiving.

The San Francisco-based ride hailing company that was last valued at $62.5 billion has named a high-powered board once before. The company has a U.S. safety advisory board, which includes the former Boston Police Commissioner Ed Davis and Margaret Richardson, the former chief of staff to then-U.S. Attorney Eric Holder.

Those board members have helped Uber weather crises. When an Uber driver in Kalamazoo, Michigan, allegedly went on a shooting spree, Davis represented the company to put the incident in context. Kroes, although not yet an advisory board member, came to the company’s defense last year when a Brussels court banned cars using Uber’s taxi application. “If Brussels authorities have a problem with Uber, they should find a way to help them comply with standards,” said said at the time.